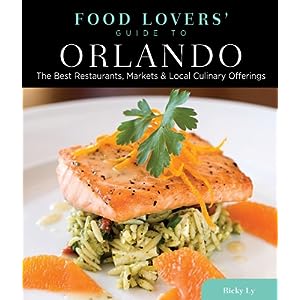 Brother Ricky Ly from the University of Central Florida Phi Chapter recently published his first Book!!! If you’re a super Foodie and want to visit some of the best restaurants in Orlando, FL, be sure to find Ricky’s book on Amazon.com HERE!

From the Back Cover

The local food culture is growing in Orlando. Because of its strong tourism industry, the city is often stereotyped as a place known for its many chain restaurants, but Orlando is a world-class destination that offers a diverse culinary landscape. Here it’s about the neighborhoods. From pockets of Vietnamese enclaves and a growing “Little Brazil” near International Drive to a huge food truck scene and an increasing number of farmers’ markets that feature local, farm fresh, all natural foods, Orlando is becoming more and more of a food lover’s delight. In Food Lovers’ Guide to Orlando, seasoned food writer Ricky Ly shares the inside scoop on the best places to find, enjoy, and celebrate these culinary treasures. A bounty of mouthwatering delights awaits you in this engagingly written guide.

With delectable recipes from the renowned kitchens of the city’s iconic eateries, diners, and elegant dining rooms, Food Lovers’ Guide to Orlandois the ultimate resource for food lovers to use and savor.

Ricky Ly is the food writer for Tasty Chomps!(http://tastychomps.com), a food and restaurant website dedicated to finding culinary adventures throughout Orlando as well as journeys and foodie discoveries overseas.

Born and raised in West Palm Beach, Florida, his passion for food and adventures began very early on, instilled by his Vietnamese and Chinese immigrant parents. His first memories were of pork belly and hard boiled egg dishes in the late afternoons and steaming dim sum plates of sweet and slurpy shrimp rice paste and dumplings on Saturday mornings. In 2003, he moved away to attend the University of Central Florida in Orlando, Florida where, among other things, he graduated with a bachelor’s degree in civil engineering and wrote for the university’s student newspaper, the Central Florida Future.

He currently resides in Orlando, Florida working by day as a civil engineer and writing by night as he continues his lifelong quest to find great eats in all sorts of nooks and crannies of the world.
TastyChomps.com recently received awards from the Orlando Sentinel and is featured on Zagat’s Fork and Tell.